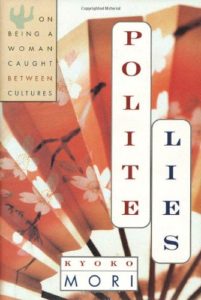 Throughout, Mori examines the paradox at the center of her own life: she is too Japanese to trust irrational feelings such as love or grief and too American to live a life built on denying them. Standing in this painful place of perfect honesty, Mori explores the ties that bind us to family and the lies that keep us apart, the rituals of mourning that make death human, and the images of the body that make sex seem foreign to Japanese women and ever present to Americans.

In Polite Lies Mori has created essays with the power of autobiography. In her hands, one woman’s life is a mirror of two very different societies.


Reading Kyoko Mori’s Polite Lies, one makes a luminous journey into a woman’s thoughts, hear with her ears, and we feel with her heart. It’s a lovely and memorable trip.

– Shirlee Taylor Haizlip, author of The Sweeter the Juice.

A beautiful book. Her prose has the deceptive simplicity of a Japanese garden. By itself, each element seems to be plain and unadorned, but, in combination, the effect is stunning.

Kyoko Mori is uniquely qualified to write at an intersection many have visited but few have truly understood.